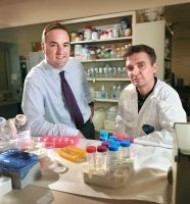 Codagenix, a Stony Brook biotech company, has closed on $322,000 in public and private funding, including the latest round from a coalition promoting Long Island startups.

The company, which digitally simulates viruses to produce vaccines, received $100,000 through a joint investment from Accelerate Long Island and the Long Island Emerging Technology Fund. Codagenix also won a $222,000 grant from the National Institutes of Health.

In total, Codagenix has raised $1.3 million this year. The company’s co-founder, J. Robert Coleman, said the investment from the Long Island groups is critical because it allows flexibility to spend the money on the company’s most advanced technology, which targets the influenza virus.

“There are certain things we can’t use government funding to do,” Coleman said. “This latest money is crucial to support our influenza program.”

The grant from the National Institutes of Health is specifically to develop a vaccine for the virus that causes Dengue fever.

Accelerate’s funding acts as a grant that converts into debt if the company leaves New York State, goes public or goes bankrupt. The Emerging Technology Fund’s investment is a loan that can be converted into an equity stake.

Codagenix, which has four employees, was founded in 2011 on research developed in the laboratory of Stony Brook University Professor Eckard Wimmer. It is based on the school’s campus, at the Long Island High Technology Incubator.