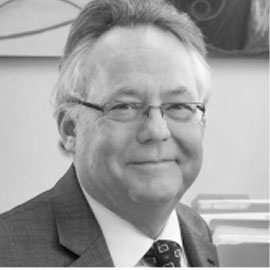 Doon Gibbs earned a B.S. in physics and mathematics from the University of Utah in 1977, and an M.S. and Ph.D. in physics from the University of Illinois at Urbana-Champaign, in 1979 and 1982 respectively. He joined Brookhaven in 1983 as an assistant physicist and progressed through the ranks to become a senior physicist in 2000. Gibbs’s managerial experience at Brookhaven includes the posts of Group Leader of X-ray Scattering, Associate and Deputy Chair of Physics, Head of Condensed Matter Physics, Interim Director of the Center for Functional Nanomaterials, and Associate Laboratory Director for Basic Energy Sciences. He became Deputy Laboratory Director for Science and Technology in 2007.

Doon Gibbs was honored with the 2003 Advanced Photon Source Arthur H. Compton Award “for pioneering theoretical and experimental work in resonant magnetic x-ray scattering, which has led to many important applications in condensed matter physics.” Gibbs was instrumental in overseeing the design and construction of Brookhaven’s Center for Functional Nanomaterials, and has played a significant role in advancing other major projects including the National Synchrotron Light Source II and Interdisciplinary Science Building. He has also overseen the growth of Brookhaven’s basic energy sciences programs, including chemistry, materials science, nanoscience, and condensed matter physics.

Gibbs is a Fellow of both the American Association for the Advancement of Science and the American Physical Society.